I had the great fortune to be able to attend the URAWAN – DREAMS COME TRUE Ura Dori Wonderland 2016 shows on September 24th and 25th at Osaka-jo Hall in Osaka, Japan. The 'doors' opened at 3:30pm and extravaganza was over sometime the 8 o’clock hour (IIRC). This report is a collection of information, memories and pictures from the two show days I was there and should be taken as such unless otherwise stated...

It took place at Osaka-jo Hall in the Kyōbashi area of the Chuo ward in Osaka. 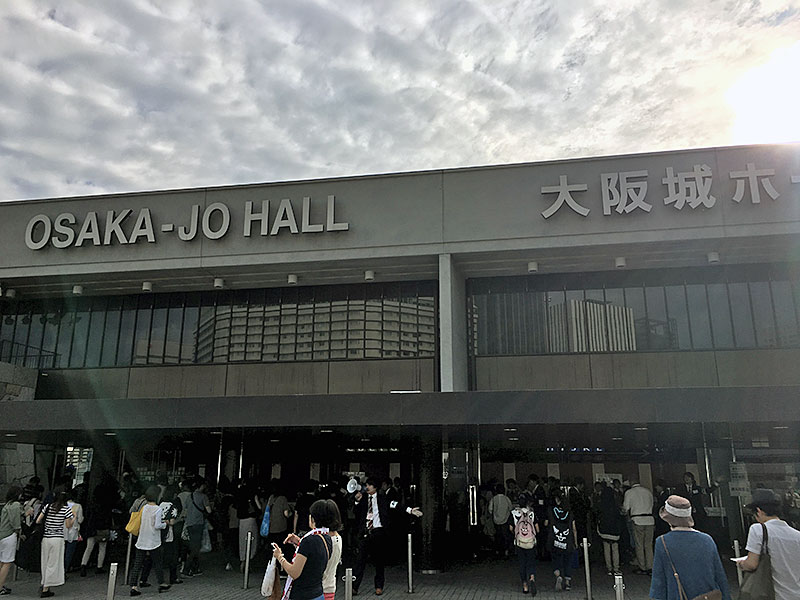 Osaka-jo Hall is one of the few non-historically related buildings within Osaka Castle park region. With the famous Osaka Castle so close, it made for beautiful views both coming and going from the hall, especially at night.

When I first arrived at the Osaka-jo Park train stations, there was a long pathway to walk to get to the hall. During the walk, musicians of varying styles played their hearts out… 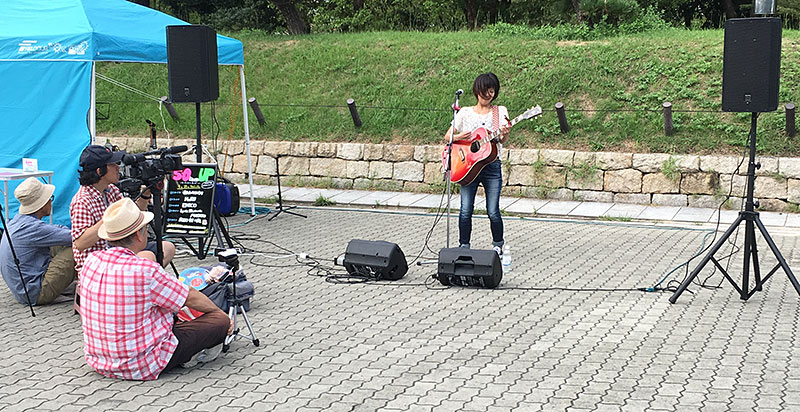 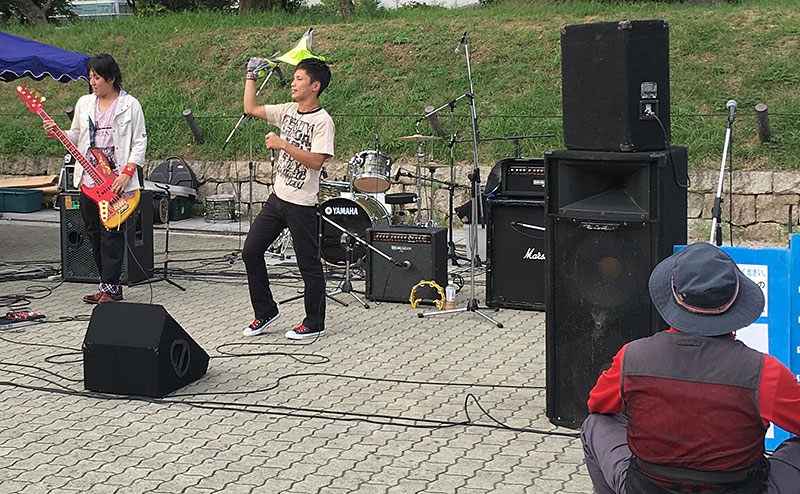 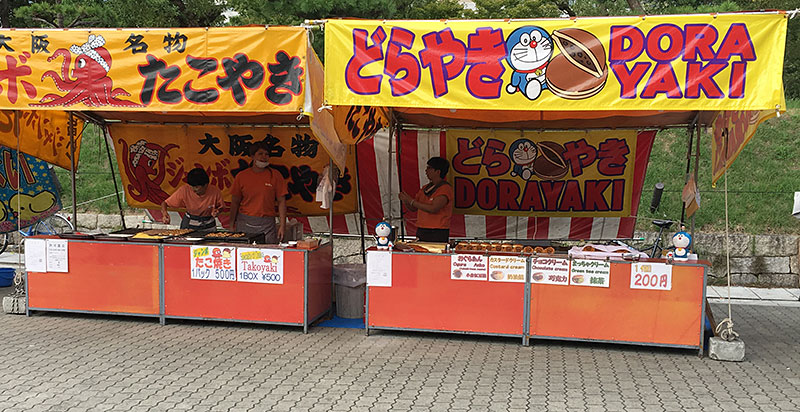 When I finally did make it to the hall, there were multiple locations to take pictures with Warukuma… 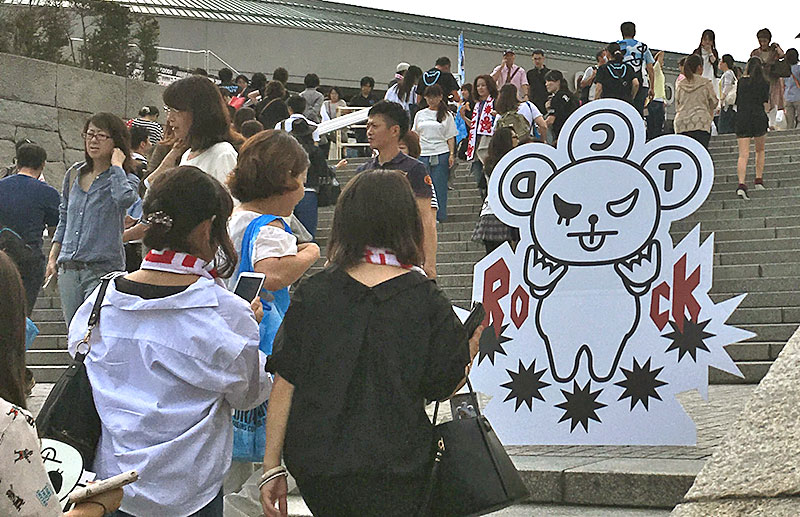 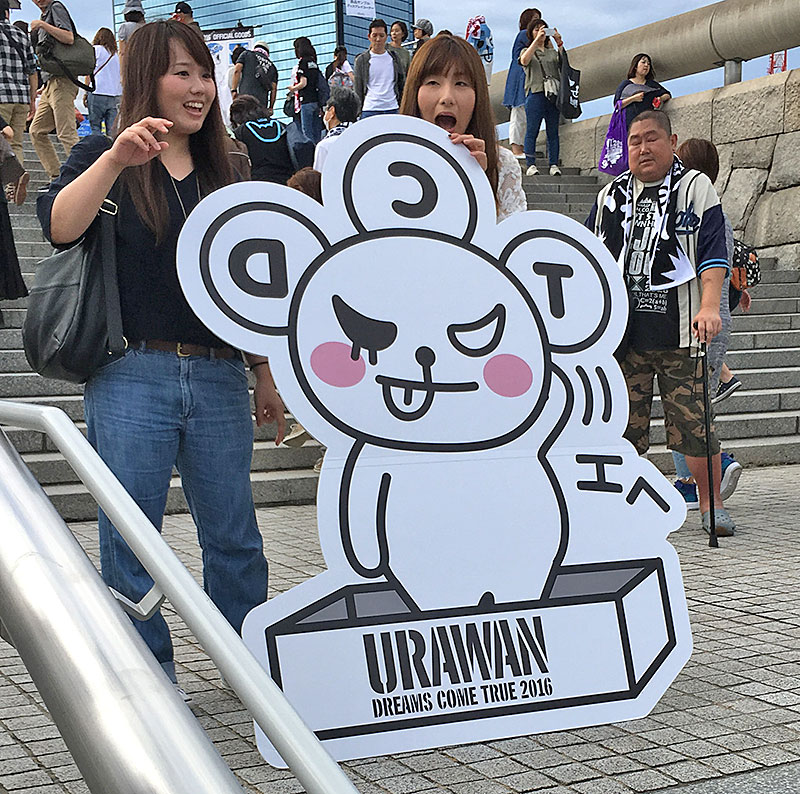 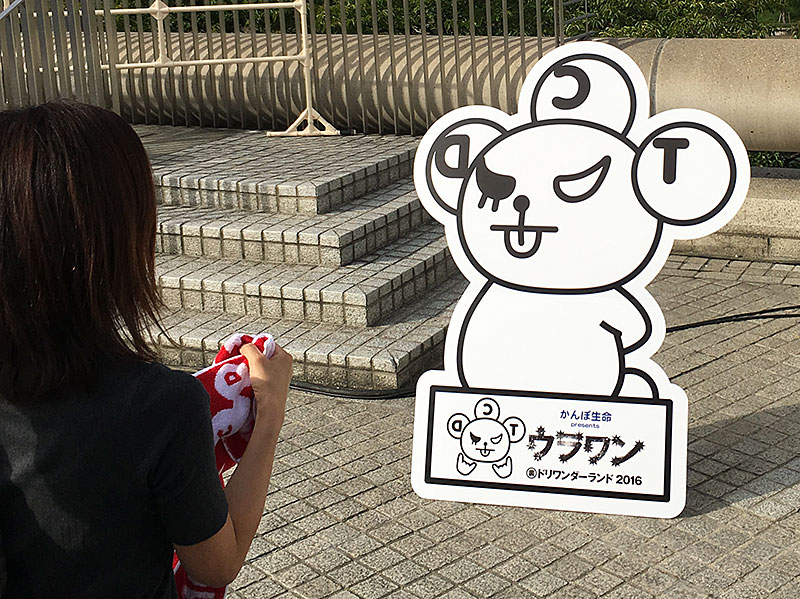 …as well as the traditional “Pics with DCT” banner poster 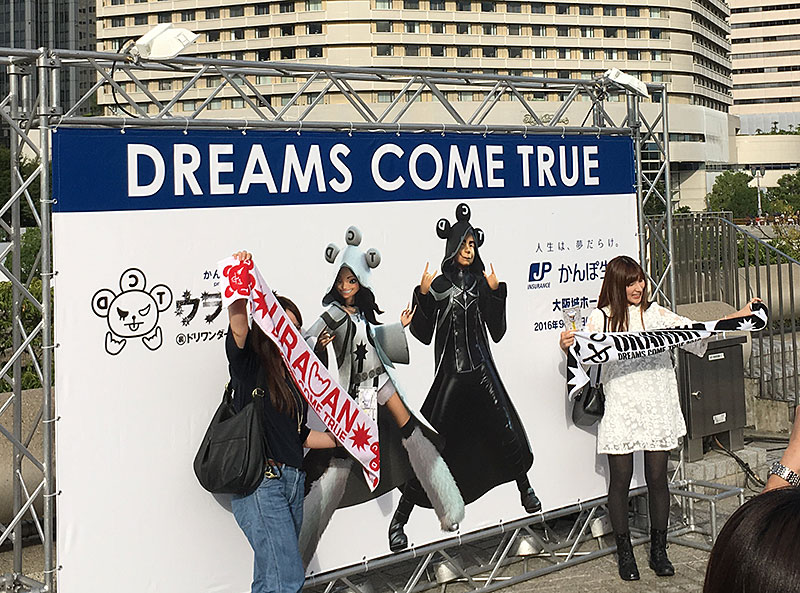 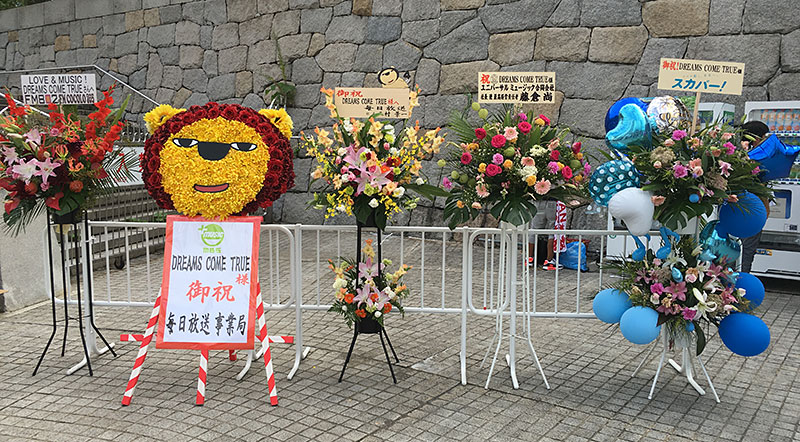 Of course, before you actually entered the hall, you had to spend some time at the…

The goods area was pretty similar to past concerts in terms of length of line, tent configuration and the goods offered, tho some of the specialty goods (like the parka hoodies & yoshio kubo’s) were already sold out before I got there. 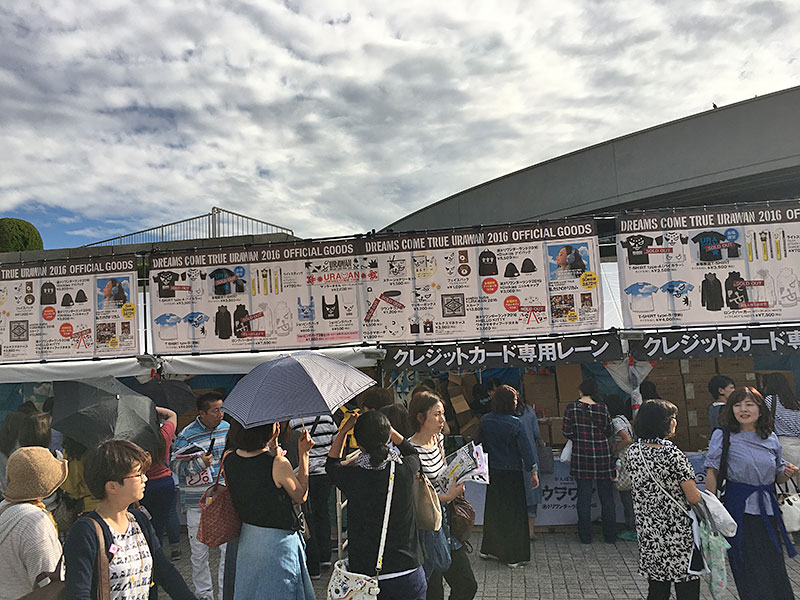 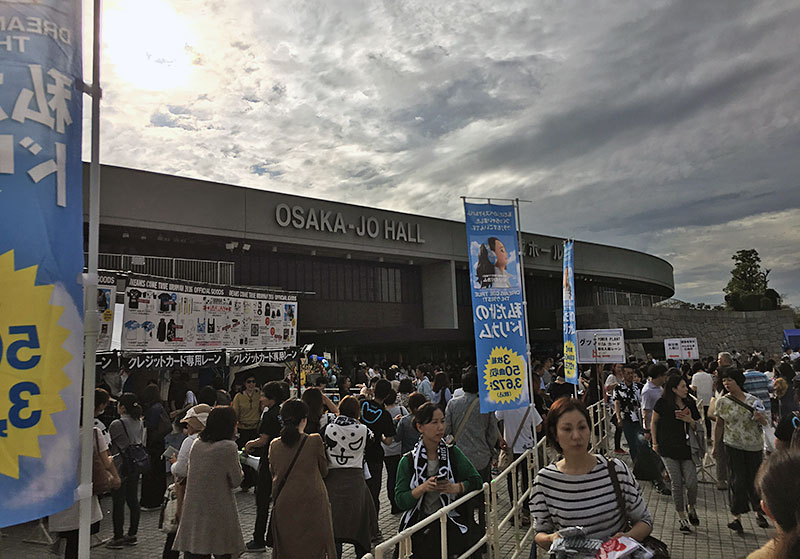 I grabbed three of the light sticks (Attack U, Chance Ra & Warukuma versions)… 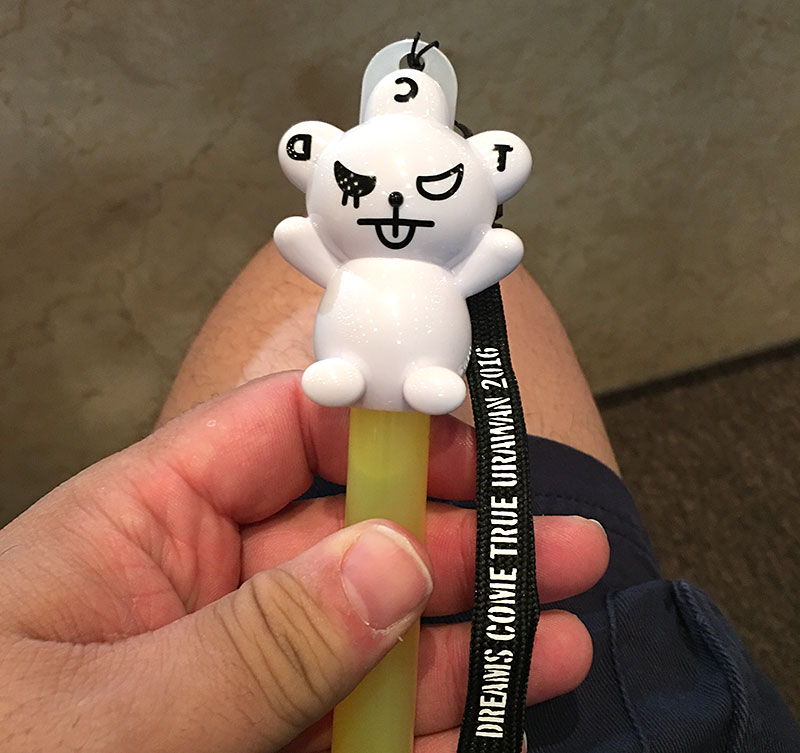 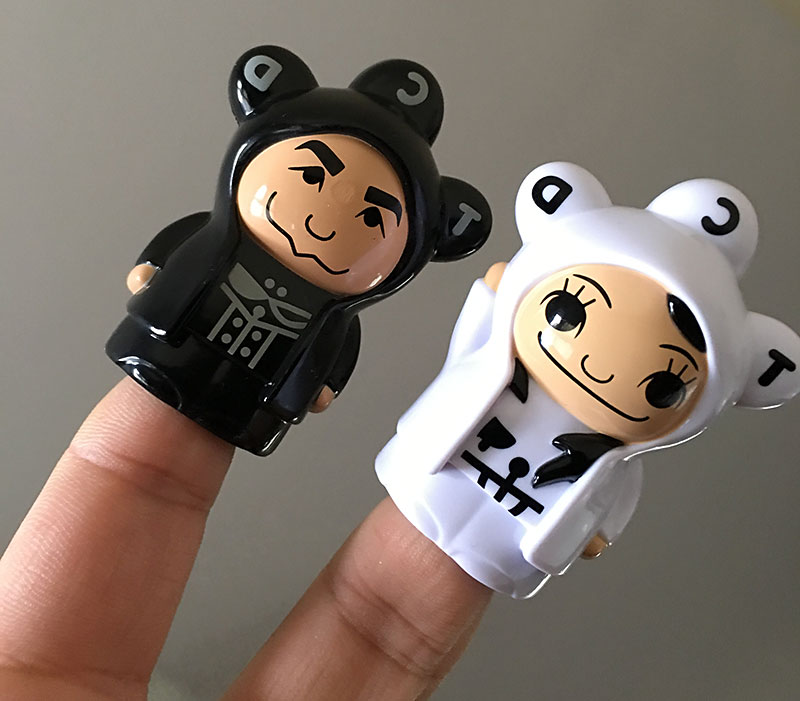 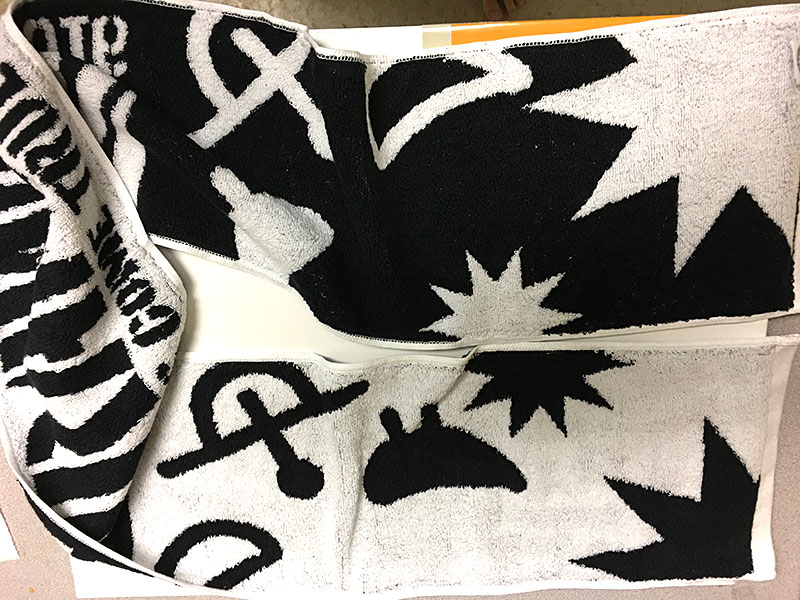 …as well as three of the shopping bags (White, Black & Sky-Cloud blue) 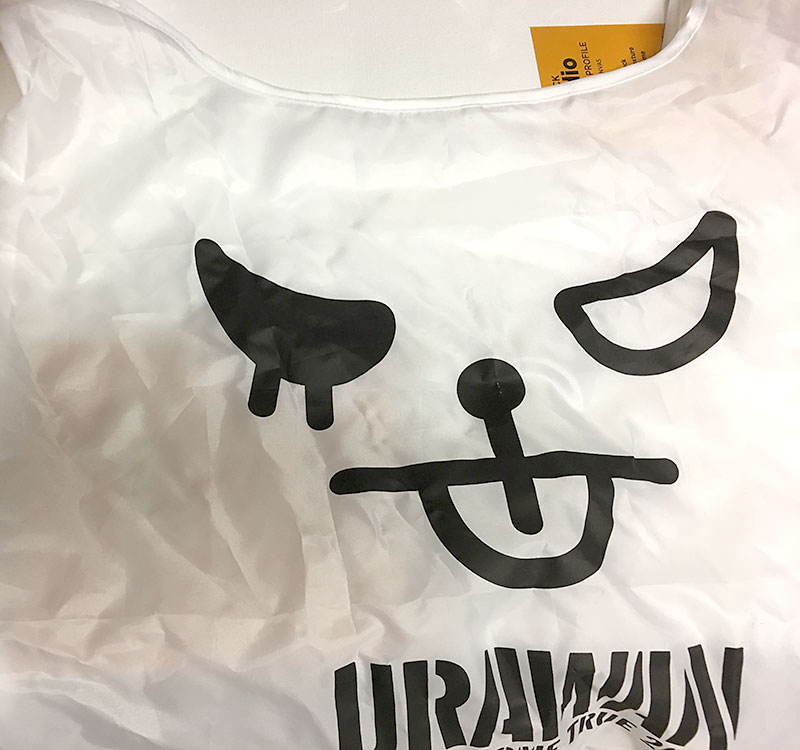 When I got to my seat, I discovered that every seat had a small bag full of DCT fliers (related to the concert & various goods), plus this awesome Warukuma mask… 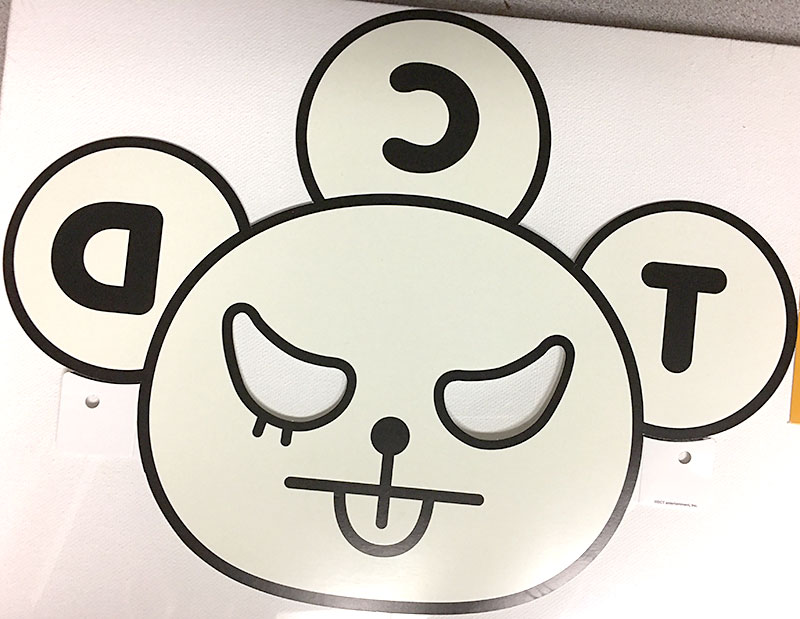 The stage was a series of rotating circles of varying heights
(All these circles rotate at times, sometimes in different directions)
There are also giant video screens hanging from the ceiling (one for each side).

The floor crowd is split so that there are 6 (IIRC) directions from which people can exit and enter…initially. The crowd is also relatively close to the stage, in comparison to other shows.

- There was graffiti all throughout the stage area (on beams, amps, etc), supposedly by the evil Warukuma…

- There was a “Warukuma cam” where different audience members got “Warukuma-ed” on the video screens.

- Right before the concert begins, they play a video that explains the backstory for the concert (absolutely gorgeous animation, btw). There a great scene of a giant Warukuma head floating in the dark sky that looks like a DCT Death Star

Here are the songs performed at the show (minus the encore songs, IIRC), tho not in this particular order… 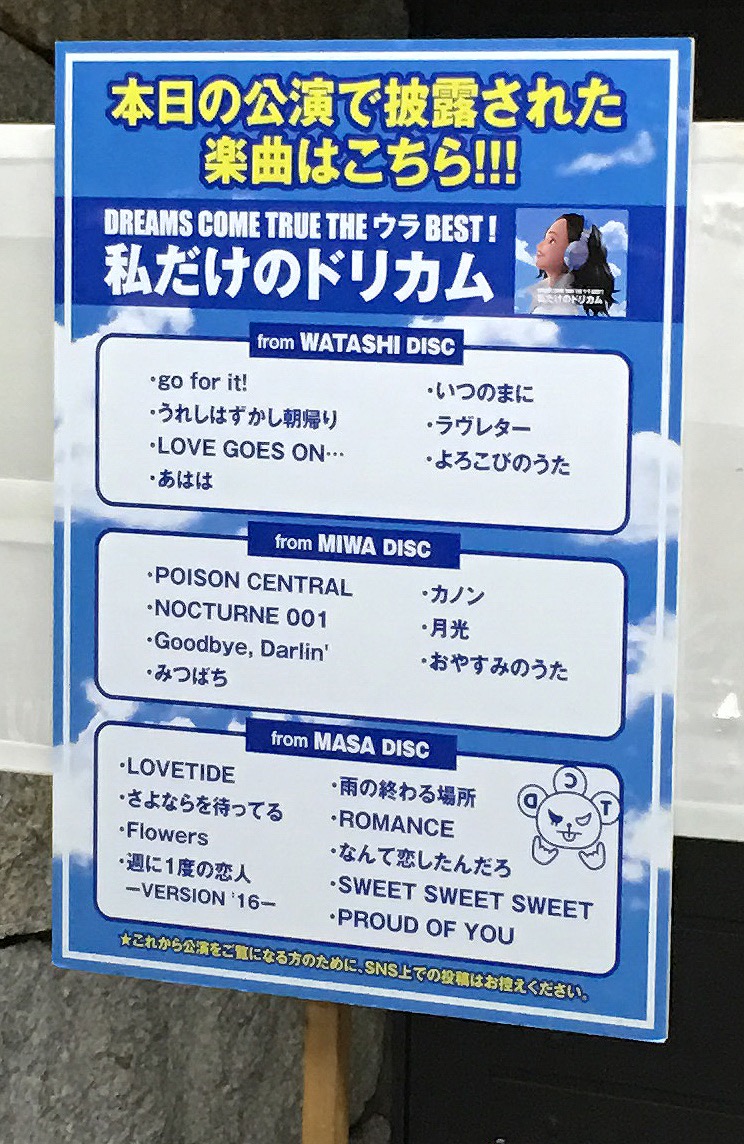 (I’ve been debating how much to write about the show itself; bearing in mind that some readers will be buying the Blu-ray/DVD and wouldn’t want to see too many spoilers. Hopefully you’ll understand if I become cryptic with some these special moments…)

- When members of the show started to come out (including Miwa & Masa), they walked along pathways that put them in very close proximity to the fans on the floor…the crowd LOVED that

- I loved the crowd’s pop when Rin showed up. Such a great singer and so important to the fans…

- It’s been great watching Masa become such a great master of ceremonies over the years. He doesn’t disappoint!

- Kudos to the guy in charge of the Electronics platform. He climbed up there with many electrically lit wires attached to him. Could have very easily gotten things tangled, but he worked things like a pro

- Along the same lines, kudos to the dancers for performing with similar electrically lit wires near the beginning of the show. The chance of tangle was big, but they pulled it off well

- The musicianship, as always, continues to be brilliant. My salute to this variation of the DCT horns!

- Near the end of the concert, they play a “story concludes” video that shows that WaruKuma was defeated and the dark & gloomy skies change and Miwa takes off her hood to look up into the beautiful blue skies (think the cover of the “watashi dake” album).

- On Sunday night, JUON (lead guitar for the show) was outside one of the exits signing autographs & taking pics with fans

- On the way back to the train station (a different one that I arrived at), I walked by the many DCT trucks and a number of them had Warukuma masks and/or stickers on their windows 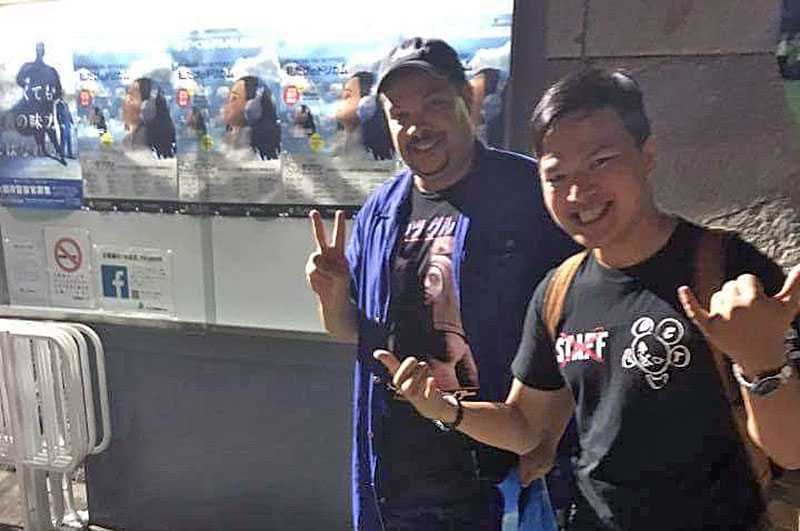 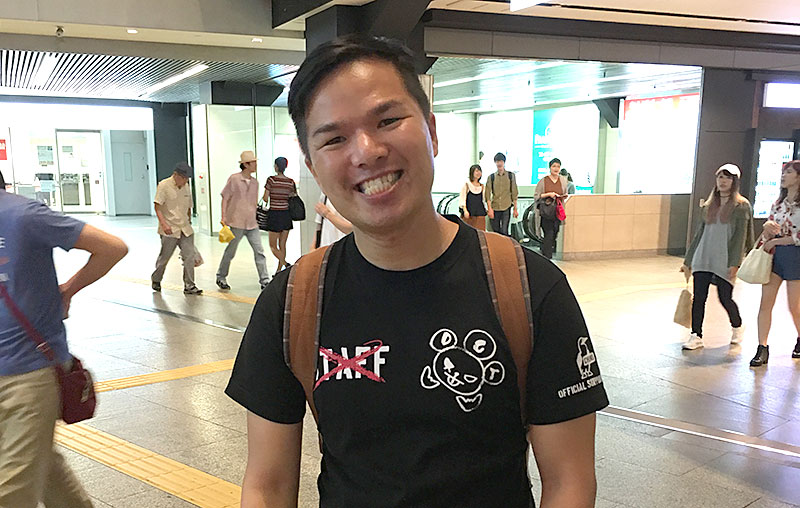 - A great performance through and through! Since I’d seen DCT at both large Wonderlands and cozy small venues, I was curious to see what a mid range show might present. I was definitely not disappointed…the same energy, performances and creativity, just in a smaller setting. Very much looking forward to reliving the experience on video

I had to log in just to say that.

Good stuff! Thanks for the review, Jei.
Top

Thanks everyone! It was great being back

Jei -- did that mask moment make it into the Blu-ray?
Top

Yes I think so, unless somethning else happened with the masks as well

It's right at the end though in kind of a extra bits section after the closing credits.
Top

It's right at the end though in kind of a extra bits section after the closing credits.

I'm glad they included it...it was so surreal seeing thousands of us all wearing that mask ^^
-Jay
DCTJoy.Com - The Joy that is Dreams Come True
http://www.dctjoy.com/
Top
Post Reply
8 posts • Page 1 of 1