I'm back from Japan! I arrived Tokyo last Thurs. The concern was on Sat in Yokohama. Everything was so perfect! I'm so satisfied with the 3 hour concert. Their performance was so good! Finally, I got to see them in real person.

The best part is that DCT announced WONDERLAND 2019 at the end of the concert! (Probably the last DWL.) Lastly, I joined PowerPlanet fans club after the concert so that I could get access to DWL 2019 tickets earlier than public. Let's get ready for the party!
Top

sudajiang wrote: ↑
Wed Dec 20, 2017 6:07 am
I'm back from Japan! I arrived Tokyo last Thurs. The concern was on Sat in Yokohama. Everything was so perfect! I'm so satisfied with the 3 hour concert. Their performance was so good! Finally, I got to see them in real person.

The best part is that DCT announced WONDERLAND 2019 at the end of the concert! (Probably the last DWL.) Lastly, I joined PowerPlanet fans club after the concert so that I could get access to DWL 2019 tickets earlier than public. Let's get ready for the party!

Congrats Sudajiang! I'm glad you were finally able to go and had a great time!
What were your favorite songs that they performed?

If you guys want to listen to the "new" songs performed on the concert, please refer to their new album "THE DREAM QUEST". (I guess everyone knows that already.) I liked some of them right away, such as 世界中からサヨウナラ, あなたが笑えば, その日は必ず来る, あなたと同じ空の下, 九州をどこまでも. Sadly, Miwa didn't sing some of my old old favorite songs such as 悲しいKiss, 眼鏡越しの空, 時間旅行, Eyes to me...Per "audiences' request", she sang the first sentence of すき(Suki)...almost made my cry...

Even though we planned to buy the tickets right after it's avail in market, we were not lucky enough to get seating tickets. What we got were "立见” which means standing tickets. My friend in Tokyo told me that the tickets were assigned by drawing. Actually it turned out to be no difference than seating tickets because pretty much everyone was standing during the whole 3 hour concern.

There was an little accident at the concert. Masa's microphone stopped working when he was talking. He made up some jokes right away to cover up. I should say the whole team handled the little surprise very well. 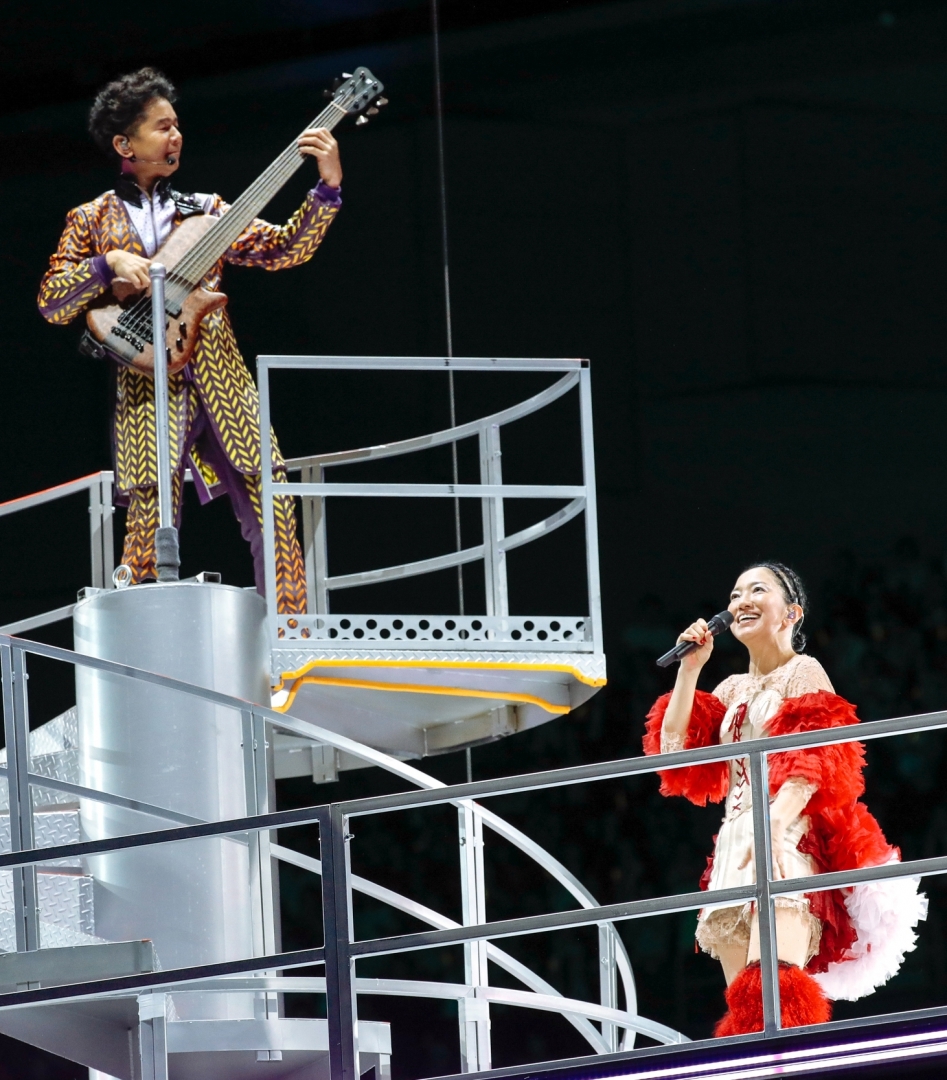 Thanks for the report!

We arrived in Yokohama a few hours early in order to line up for the goods sale, which began on time. After making our purchases, we had time to have lunch and visit the Ramen Museum, which features a basement level reproduction of the area circa 1958, and includes several ramen shops, where people were lined up to try different styles of noodles. A person could spend all day eating their way from one shop to another (maybe next time…).

The flow of people into the Arena was well managed, but we were a little disappointed to find our expensive seats were at the very top row. The problem was, we bought tickets rather late, and whatever was left was going for pretty high prices. On the good side, we had a clear view of the centrally located stage and three of the six screens, and being high up, it was unnecessary to stand in order to have a clear view.

The stage was similar to the one used for the Attack 25 tour, but smaller, as it used platforms on the left and right which moved up and down rather than sideways. It may have been limited by the size of the arena, which we were told seats about 13,000 (so not very large). The performers entered the stage from below using an inflatable passageway which miraculously disappeared early in the show (I wish I had been watching more closely).

OPEN SESAME
Kessen wa Kinyoubi
Jet! (Miwa tells us that as this is almost the end of the tour, the first set will be a
warm-up for the Wonderland; “a service to babies.”)
24/7
Tsuretete, Tsuretete
Marry me? (The first time Miwa tells Masa to “shut up” for talking too much.)
Memai
Escape (Masa tells us he is “trying so hard” [to perform or to be quiet, I’m not
sure]).
CARNAVAL (Keita and Rin give complicated dance instructions; Miwa warns of
“confusion”.)

Masa reintroduces Koh, tells us about Koh’s beautiful performances in a number of DCT’s songs; Koh begins to play ‘Suki’, and Masa starts to sing, which gets everyone laughing. Koh plays a solo while the screens show a video of the recording process for The Dream Quest, reminiscent of the recording video on The Love Rocks DVD. Miwa and Masa decide on the final song order. Masa says “No one records like this anymore”. The stage goes dark and silent.

The screens come back on with an animation of the ‘statuesque’ Miwa and Masa from the album cover walking toward a gigantic temple-like structure. Twelve strange creatures appear, ‘apostles’, each representing a different element of music (they reappear at the end of each song, as in the CD booklet). Masa reappears on stage, soloing into the second set:

The Theme of The Dream Quest (Masa apologizes for his real abs not being in
the same shape as his animated version.)
KNOCKKNOCK
Sekaijuu kara SAYOUNARA
Himitsu
Anata ga Waraeba (This song is dedicated to Arisa Mizuki, the actress who
played Hinata Mochizuki in the film Seventh of July Sunny
Day and is sung in Hinata’s style [the ‘self cover’]).
Sono Hi wa Kanarazu Kuru (A pause to “flip the record;” this would be the end of
side one of the vinyl LP.)
Anata to Onnaji Sorano Shita
Kyuushuu wo Doko made mo (We are taught a ‘train dance’ to do along with the
song; afterwards there is a video with Masa
dressed like a JR South conductor. Masa tells us,
however, that the video was filmed in Tokyo.)
Ochichae
Futsuu no Konya no Koto wo – let tonight be forever remembered –
Itoshi no Riley (Miwa ends the song with “Goodnight, my Yokohama Hinamatsuri
babies.” [The Doll Festival took place on the day of the concert.]
Masa tells us the CD is selling well, but today’s electronic
environment does not encourage the sale of physical copies, so
they tried some novel marketing, including displays in post offices.
Unfortunately, the CD’s often ended up under the counters.)
Anata no you ni

On the screens, the creatures disappear, and the Miwa and Masa characters bid farewell to the temple. The band disappears under the stage again, and the crowd does the wave six times before the encore:

Miwa and Rin come out as Funk the Peanuts in wigs and sparkles to perform ‘Taiyou ni Kuchizuke wo!’, and a previously unrecorded song written for KinKi Kids.

Miwa and Masa return in striped outfits reminiscent of the doll festival costumes (which was taking place at that time) and sing a traditional doll festival song.

The concert ends with ‘LOVE, LOVE, LOVE,’ ‘Lat. 43 N.,’ and ‘OSAKA LOVER.’
The band is reintroduced and takes their bows, with the audience calling “Yoshida Miwa!” at the end. Miwa and Masa leave with the promise of the Wonderland/30th anniversary next year.

Seeing the new songs performed live certainly enhances them: I didn’t like ‘Attack 25’ at all (‘My Time to Shine’ excepted, although that was mostly due to the video) until I saw the DVD. I like ‘The Dream Quest’ much better than ‘Attack,’ but get the feeling that these new songs are pieces of old songs put together. While in Japan, I listened to a shuffle of the first 13 albums (thank-you for that download so much, Nakoruru!) on my MP3 player when I went running, and continue to do so now that I’m back home. I love those old songs so much – why don’t I feel the same about these newer ones?

Highlights of the trip:

I purchased my first Blu-ray (Urawan 2016) at the concert.

I found a copy of the complete band score for the ‘Million Kisses’ album!
Top

Thanks for the great review, nogizaka!

Interesting that they were being flexible with the set list since it was close to the end of the tour.

Out of curiosity, did they do anything special with "Sekaijuu kara SAYOUNARA"?
(Just wondering since that dance troupe helped make it popular)
-Jay
DCTJoy.Com - The Joy that is Dreams Come True
http://www.dctjoy.com/
Top

Besides Miwa telling us "If you know this song, you can say 'goodbye' 24 different ways," there was nothing special added to the performance. The dance presence overall was smaller than usual with only Keita and Shige on stage.
Top
Post Reply
22 posts